Labour Day: A Reminder of Intolerance for Mediocrity

Today marks the 112th celebration of Labour Day in the Philippines, a celebration of recognising the Filipino worker’s triumph during the American occupation wherein thousands of members from the Union Obrera Democratica de Filipinas, the first labor federation in the country marched from Plaza Moriones in Tondo to Malacañang chanting anti-American capitalism and imperialism songs to demand complete independence. The celebration emphasizes the significant contribution of the country’s workers in  economic development and positive social changes. The century-old outcry remains as workers remain poorly compensated.

I remember working as a company nurse having to commute 4 hours daily to and from the workplace and receiving 7,500 pesos for a month’s worth of efforts. The salary was enough for me but I cannot imagine how life would be having children to send to school and feed daily. Not only did we have to deal with being overworked, we constantly had to face the threat of work insecurity. Given that the country produces thousands of nurses yearly, companies thrive on this fact to always keep us on our toes. Every time we try to ask for better salaries and benefits, they remind us that there is always someone desperate and willing to take our job so we succumb to threats and put up with second rate treatment. Other nurses are forced into agreements waiving their right to separation pay and they cannot voice it out or else they will not be given credit for years of employment. These are a common struggles most nurses face and it gets worser for people working blue-collar jobs. Increasing cost of living is not proportional to the daily minimum wage. 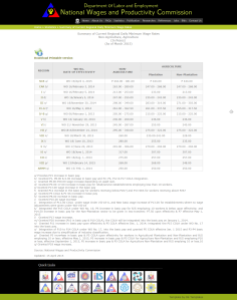 Updated Wages Across the Nation

Employees treated like animals in a zoo wherein companies expose us to unhealthy working conditions without fair compensation. We tolerate and put up with a lot of things than be unemployed. We accept it as it comes and we fail fight for our worth. Nurses swallow their pride thinking after 2 years the suffering will be over. They temporarily try to forget how much they spent to get decent education. After being used as cash machines by universities, we are faced with the same fate after graduation.

Stop being content with the current situation. Workers deserve better than mediocrity. We should aim for fairness and better work conditions.

I no longer spend a single minute on those who lie or want to manipulate. I decided not to coexist anymore with pretense, hypocrisy, dishonesty and cheap praise. I do not tolerate selective erudition nor academic arrogance. I do not adjust either to popular gossiping. I hate conflict and comparisons. I believe in a world of opposites and that’s why I avoid people with rigid and inflexible personalities. In friendship I dislike the lack of loyalty and betrayal. I do not get along with those who do not know how to give a compliment or a word of encouragement. Exaggerations bore me and I have difficulty accepting those who do not like animals. And on top of everything I have no patience for anyone who does not deserve my patience.” —José Micard Teixeira