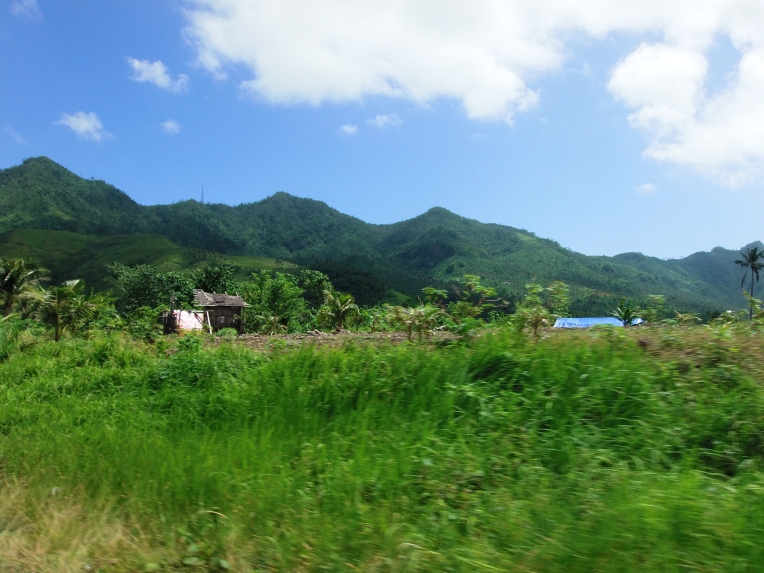 I wanted to stay at home that day but it did not take that long to convince me to go on spontaneous adventure. Our destination, one of the less traveled islands in the Philippines.  A historic island paradise nestled less than a kilometer away from the northern coast of Leyte. Half asleep, my friends and I left Tacloban around 9’o clock in the morning. We passed through several farmlands under the sweltering heat of the sun. We were lucky that most of the roads were already paved after several typhoons. Two hours later, we reached Biliran Bridge, completed around 1975. It is about 150 meters long and its central span, held in place by an arched steel structure, hovers above a short and narrow channel of water measuring about 40 meters wide at low tide.

We finally reached Biliran! We could not help but stop to see Biliran Strait, one of the passages where the Japanese had their checkpoints during World War II.

A view worth taking a minute for.

According to historical accounts, Biliran was site of the first large-scale shipyard, built during the 17th century where the Spaniards built galleons  support the trade between Manila and Acapulco in Mexico. Several boatmen passed by as I peered into the clear sea. It was so inviting that I wanted to jump from the bridge.

Bangkeros passing underneath the bridge.

Biliran’s economy is largely based on fishing. Most of its towns, especially Naval and Biliran, have excellent seaports. As we made our way to Naval, Biliran’s capital, I could not help but feel a certain nostalgia for my hometown Ormoc, Naval reminded me of the quaint aura that Ormoc exuded before malls started sprouting up. Realising that our other friends are still far we decided to stop at the first gasoline station we saw. We loaded up on fuel and washed our face covered with sweat and dust. It was already 12 noon and I could hear my stomach complaining, we stopped at the port to grab some barbecue and puso a.k.a hanging rice ( I could not help but eat with my barehands).

After a hearty lunch, we decided to head to one of the coasts to search for white sand. Little did we know that our friends signed up for a habal-habal challenge.

The challenging dirt road that turned my foreign friends into a certified habal-habal driver!

After safely driving through dirt roads and getting chased by hyperactive dogs, we found ourselves in a secluded cove. Our sore butts begged for some rest time and bored me decided to climb a coconut tree and get some coconuts for me and my friends.

First time opening a buko using a small knife and the edge of a rock.

While I was channelling my inner monkey, the rest went for a dip. I looked like the squirrel from Ice Age trying to open the buko, so I took a break and joined them.

When you see it!

I found little shrimps while swimming around. I remembered when my mother used to buy live shrimps and I would play with them before my mom cooked them (sad I know) but I couldn’t really be totally depressed because she cooks them well (I just pray for the shrimps’ souls and thank them for giving their lives to nourish and make us happy).

After we had our buko juice, we decided to go to the waterfall at Brgy. Caucab in the town of Almeria (named after Almeria in Spain). We drove through a long winding paved road. The view over the Iyusan Rice Terraces made it one-of-a-kind. Imagine a smaller version of Sagada terraces but with better roads.

We reached the end of the paved road and made our way down the dirt trail, the locals told us it would take about 30mins. but unable to contain our excitement, we made it down half the time. We dismissed the narrow muddy and rocky trail and walked liked a boss. As the sound of the waters got stronger, we walked faster. We marvelled at the 30-foot high cathedral-like falls covered by forests.

After settling in for a bit, I started feeling my leg muscles complaining. A reminder to get back in shape. While the rest went it for a dip, I felt the asian compulsion and took a selfie (normally takes me more than 10 tries before I get a decent one). 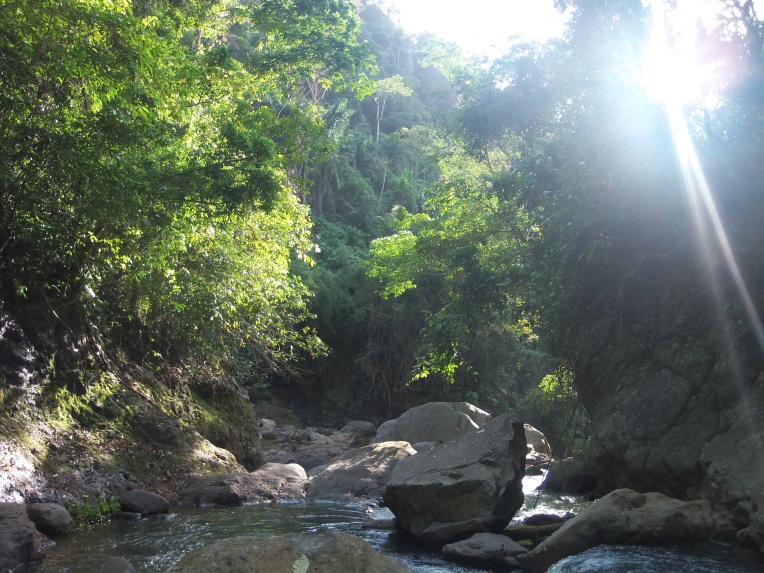 Sunlight beaming over us. 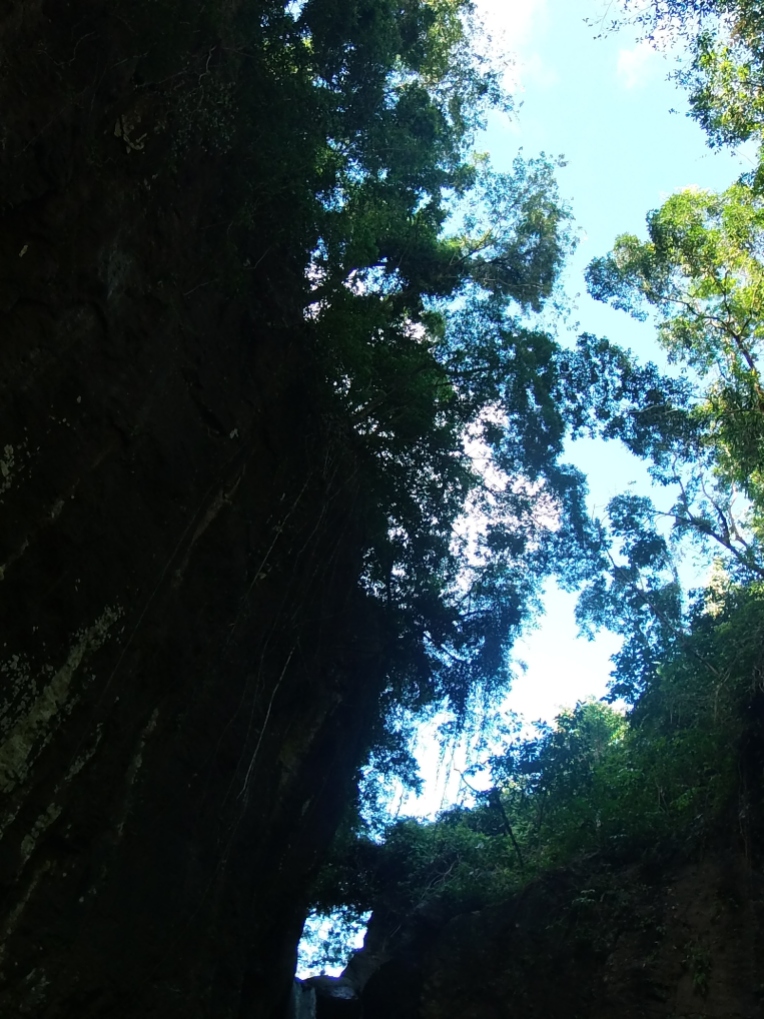 Surreal moment as I looked up.

I wanted to take a better photo but we were on a rush so this was the best one from a moving vehicle.

We enjoyed the moment and we barely noticed the minutes flew swiftly. Realising that it was almost sunset, we rushed back to the motorbikes to try to catch the sun before it says goodbye on that day. We wanted to catch the sunset over Agta beach but we figured we did not have enough time so we went into one of the nearby barangay.

Little girl playing by the shore.

We were on the wrong side but it was still a sight to behold.

Sunset by the shore with a cold drink on hand, it was almost perfect if not for the crazy kids trying to wrestle each other and kicking sand at our backs. Nonetheless, it was one of the best sunset moments that I experienced this year. I can only imagine how it looked like from the right side.

Night time came and we got separated from the rest of our friends, we went back to Naval to find a place to stay. The town did not have a lot to offer when it comes to accomodations, we found a backpackers place that charged P600 for a fan room. It was not bad until we woke up to a bunch of people talking loudly right outside the door. I dozed off quite quickly after the trekking and the bumpy ride to the beach.

We woke up next morning and went for some bread and head to Agta beach where the rest of our friends ended up. They decided to sleep on the shore with their sleeping bags. I missed the fun part that night. As they grabbed some breakfast, we thought of where to go next. One of the guys wanted to go kayaking to the nearby islands but the woman told us it was low tide and they do not rent out. I do not get the point but we couldn’t really spend time debating so we resolved to find Busai Waterfalls. 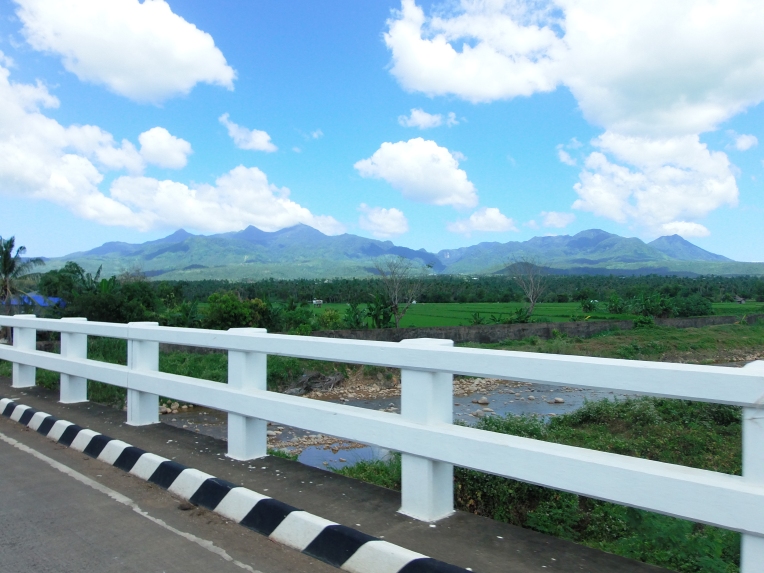 More of the road

We drove for 30 minutes trying to figure out where Ungale 2 (dos) was. I asked more than a dozen of people for directions (luckily Biliran speaks Visayan).

In search for the other waterfalls

We followed a path right through different barangay and as we ended up on a dead-end of a dirt road. On the left side was a barely noticeable trail where we had to walk over boulders and metal pipes (Busai Waterfalls is a water source for nearby dwellers of Kawayan). My slippers gave up on me so I walked on barefoot for 15 mins. (like a local). We crossed streams (you need to have a lot of leg power) to reach the mouth of Ungale River. Hidden among the thick foliage and slightly obscure from all angles was the tranquil Busai Waterfalls. 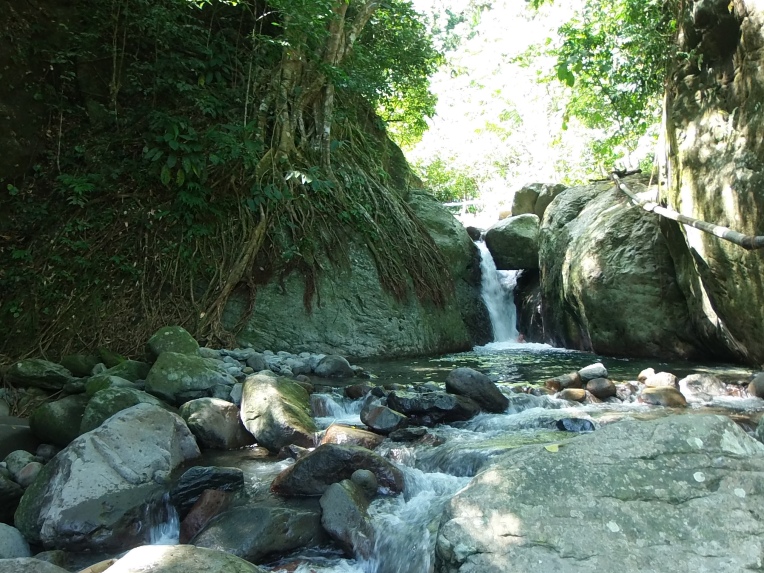 I was a bit disappointed seeing that it was not as grand as Bagongbong but I realised Busai had its own uniqueness because it is quite tricky to find there were not a lot of visitors. If you are coming from Naval, you would need to travel the Biliran Circumferential Road via bus bound for Tucdao, Kawayan. From the main road of Tucdao, you can hire or rent motorcycles for Php 25. Visitors may also ask the locals to guide them to the falls ( we had a little girl who volunteered to take us to the falls).

I had a serene dip in the cold waters. I saw a bunch of local guys climbing on top of the cliff and jumping into the middle. They are crazy I thought to myself, I got scared as hell for their safety and they started doing it like their lives did not mean anything. The water slowly glides over the mossy bedrock and you can see a bunch of frogs leaping from rocks to rocks. As we took our time to take in everything, we thought of pushing ourselves further and going for another waterfalls at Brgy. Cabibihan, Caibiran.

From Naval, it would take around 30-45mins. Ironically, Tinago (which means Hidden in Visaya) was the least hidden among all the waterfalls. From the highway, you will find a loop trail that is 10 minutes away from the falls.

Unlike the first two waterfalls, you cannot enter Tinago free. Adults have to pay P10 and P5 for children (expensive! not…) Tinago Waterfalls is a perfect hideaway for bigger groups being the grandest among the Biliran Waterfalls. The battery in my camera gave up at this point (thus the sole photo of Tinago, click here for more photos). Frustrated by the inability to take photos (first world problems), I just took a dip into a seemingly natural jacuzzi and tried real rock climbing. I took my moment as I know it would be another 3 hours motorbike ride back to reality.

Biliran is not getting the reputation it should have. For one of the smallest province in the country, it has a lot to offer. I found out later that we missed 4 other waterfalls, not to mention we did not even make it to one of the 4 islands, the rich history Biliran has from Moro invasions to aiding the Americans during World War II and the dormant volcanoes and hidden springs. For all this reasons, I will definitely go back!

previousHope At A Time of Digital Reality
nextMy Lifelist