My dad is from Bohol, from an early age, I have already seen most of the touristic places in this beautiful island. Everytime we visited we always followed the usual route. Swimming at Alona Beach in Panglao then a day trip to Chocolate Hills in Carmen and stops in Loboc to for the river cruise and at Carmen to see the tarsiers. For a moment I thought I already explored Bohol well enough. When I found out that there was a long weekend, I decided to challenge conventions and carve out a different path.

The original plan was just to stay for one night in Bohol since we wanted to go from Jagna to Camiguin to spend more time there. We left Cebu City around 4:00 P.M. OceanJet offers P600 roundtrip Cebu-Tagbilaran. It was a 3 hour boat ride and sunset  greeted as we docked in Tagbilaran port.

The sun sets as the fastcraft docks in the Port of Bohol.

When we reached Tagbiliran port, we immediately followed the directions that most of the travel blogs wrote on how to get to Loboc ( located 26km. east of Bohol). People do not usually stay in Loboc, most of the crowd would flock to Panglao. Loboc is just one of the popular stops when doing a tour around Bohol. It is famous for the river cruises and the nearby Tarsier Conservatory. We chose to stay at Loboc because it was nearer to Jagna and to avoid tourists.

Getting a tricycle is not a big problem but finding a reasonable driver to give you a local price is, so we walked for a bit to the main road. We managed to get a cheaper one eventually. We headed to Dao Central Terminal which was right across Island City Mall. One thing a traveller should remember when going around the Philippines or any place for that matter is to always have a plan B. I did not expect that the jeepney bound for Loboc had specific schedules so we ended up going back to the plaza where the other jeepneys were. Luckily, we managed to get inside the last jeepney. 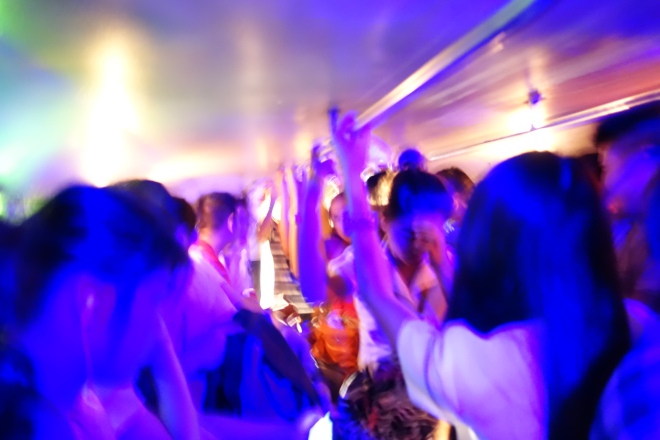 How many heads can you count? This is what I call “Filipino capacity”.

It was a tight squeeze as they had people sitting in the aisle with wooden stools. If they cared about making the passengers comfortably sitted, one side would fit 10 max but since it is Filipino capacity there were 12 people on each sides and 6 sitting in the middle. We had huge luggage with us and for a while we worried about it. The good thing is the fact that most jeepneys have space on top. It took us 40 minutes to reach Loboc ( probably 20 minutes if there were less stops). When we reached the landmark of the place we booked, it was pitch dark and we had to use our flashlights. We barely noticed Loboc River on our right side as we walked through the dirt road. It was very tranquil and you can hear all sorts of sounds echoing from different critters. Relieved not to have a lot of people walking about asking you to buy stuff or have a massage, something that you would normally experience when staying around Panglao. 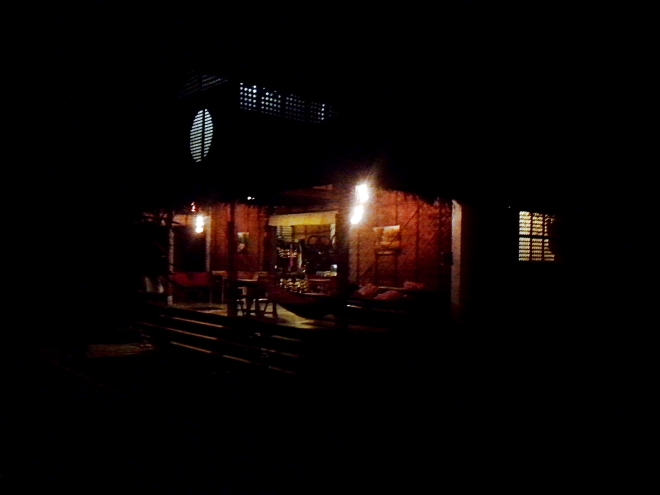 Darkness greeted us on our arrival.

We finally reached Fox and the Firefly Cottages but then realised that we booked the wrong night. Luckily there was no one occupying the room so the receptionist just let us stay. We woke up with a beautiful site. The place was serene and surrounded by lush greens.

The Fox and Firefly Resort offers a cozy and unique option for those tired of the beach. 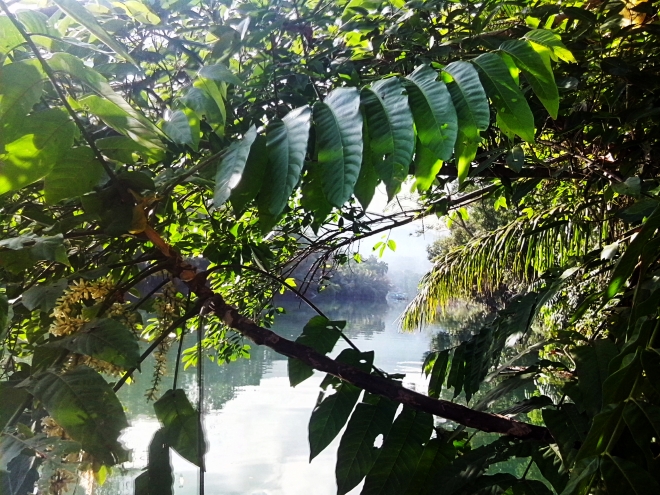 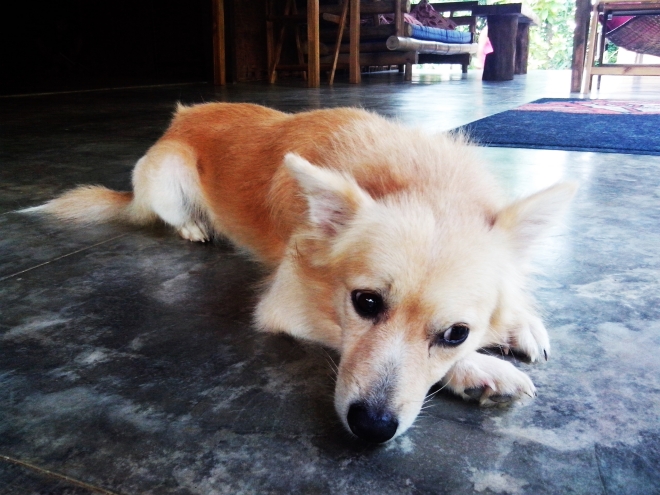 The local fox looking all pensive. 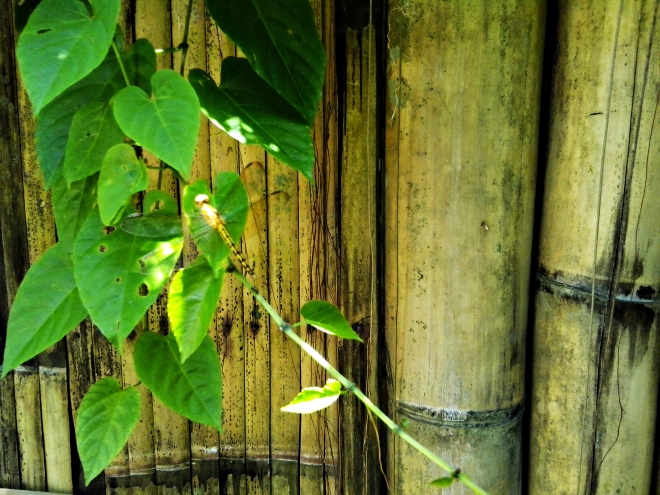 My spectator during shower time. 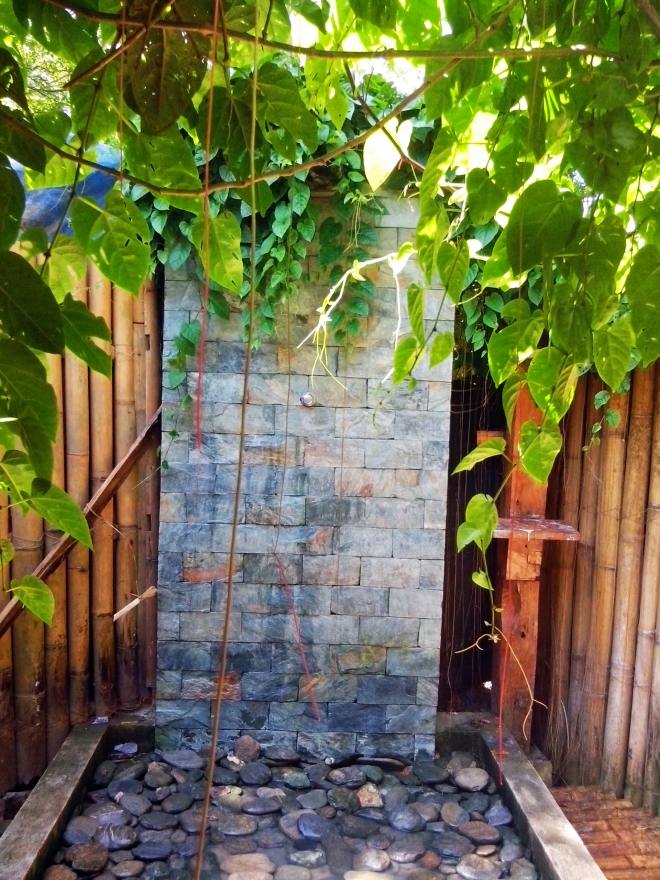 My favorite part in Fox and the Firefly. I wish I had my own outdoor shower.

After having our hot shower and grabbing breakfast, we had 4 hours to kill so we went for a 1 hour paddle tour. I have never tried paddle boarding but I have been on top of a long board and a kayak so I did not worry much about the idea of falling over.

The others went for the full day tour.

The tour guide first taught us the basics of finding the proper length for the paddle and the proper way to stand on the board. It was really not that difficult. You will only have trouble if you cannot balance well.

After the tutorial, we started the tour. The guide just went with us to make sure we were safe. I did expect him to tell a thing or two about the river but he didn’t. He was nice enough to take photos of us paddling across the river.

The weather was perfect.

I always wanted to try paddleboarding.

An hour of paddling was not much of a challenge.

The paddle tour ended near the Loboc River Resort, we thought we needed to paddle back to the cottages but we got picked up by their multicab. It was a relaxing tour and the hour spent was really worth it. It would have been better if we did the full day since the 1 hour tour was P800 for each person. 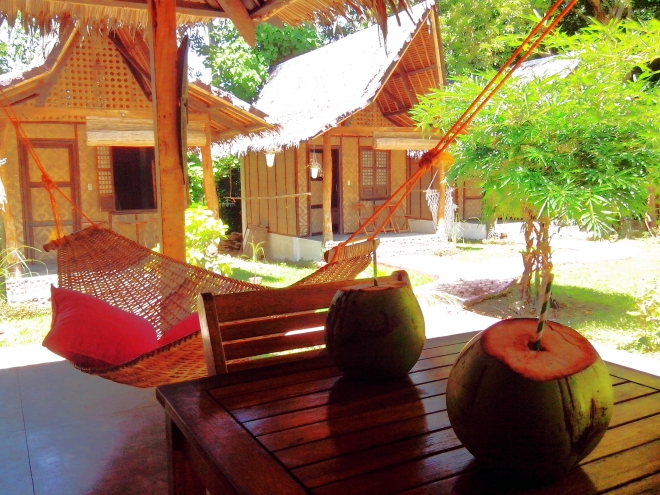 Refreshing buko after the paddle tour.

It was already 10:00 a.m. and I initially planned to leave by then, we had to rush to the main road to catch the jeepney.

The paved road to Fox and Firefly

We waited for at least 30 minutes before we got on a jeepney. There were more jeepneys heading to Loboc than heading out. At one moment, I considered hitching a ride with a bunch of locals but did not take the risk. 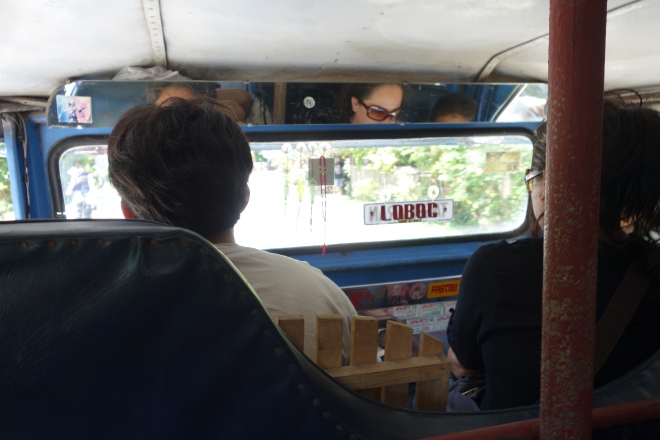 It did not take long to reach Loay Public Market and in less than 10 minutes we found a bus heading for Jagna. 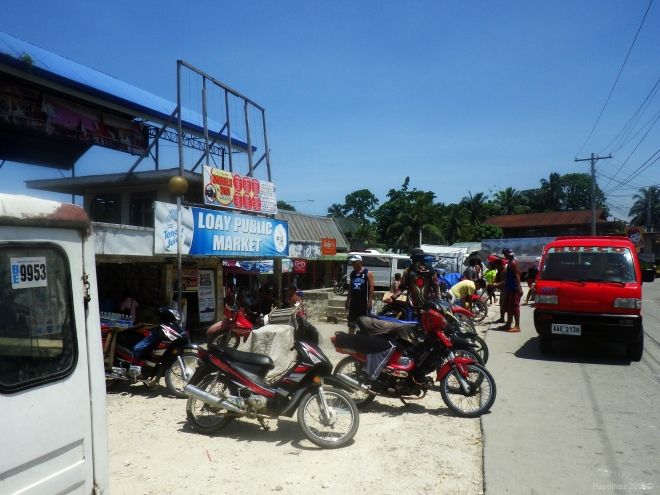 Loay Public Market, where most of the buses heading to Jagna stops.

The only problem with the bus is that it was full. We had to stand near the doors and had to move back each time the conductor would shout, “Naay manaog!”, which in Visayan means someone is getting off. It took longer than expected with all the stops. 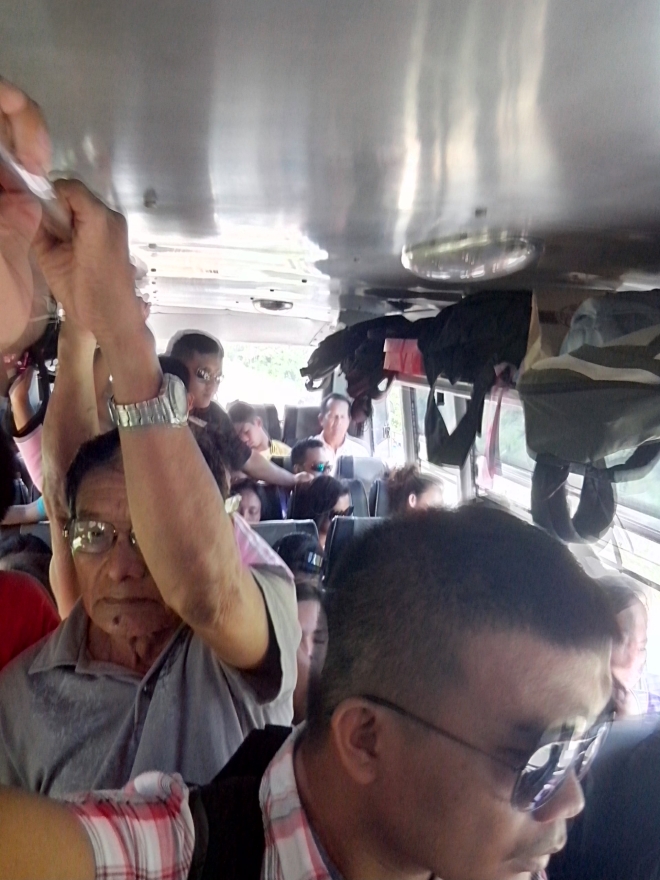 Nothing like a full bus to keep you up!

Two hours later, we reached Jagna, only to find out that the ferry to Camiguin left at 8 a.m that the schedule I knew was not updated. So we had no choice but to stay in Jagna for the night. Jagna, a historical port town on the southern coast of Bohol is also known only as a stopover before heading to Camiguin and its delicacy called Calamay (sweet sticky rice packaged inside a coconut shell). The good thing of me being obssessive compulsive was I did my research on the town and had a list of places where we could eat and stay.

Idea Pension house is not like your ordinary bed and breakfast. It is a project of a 25 year-old organisation IDEA, where they provided employment, training and housing to the deaf around Visayas.  When the driver dropped us of we were wondering where the pension house since we only saw a cafe. We walked in and found out that it is within the same building. We booked a room for the night. Their accommodation came with free breakfast and WiFi. It was a good deal and we felt good that we were supporting a good cause.

You also learn some sign languages in their menu.

Pancakes and bacon! You can never go wrong (if you are a carnivore that is).

It was still 3p.m., we were looking for things to do around Jagna, they have a nearby waterfall and a spring reservoir. Later, we reached a conclusion and decided to go to Chocolate Hills since it was his first time in Bohol. I did not want him to miss Bohol’s iconic geological wonder. In Tagbilaran City, it would be easy to find motorbikes for rent  but it was the contrary in Jagna, since people barely stay there, there was little market for it. The pension house was just walking distance from the public market so we went there to try to find a way to head to Chocolate Hills.

We had to bargain ( being with a foreign guy did not help). We asked around and most of the habal-habal drivers (extended motorcycle that could fit up to 6 people) wanted to charge us P2,000 which was ridiculous. Going back on the bus to Loboc was also not an option because it would take us another two hours. We ended up with an old guy who finally agreed to take us to and from Chocolate Hills for P1,000. 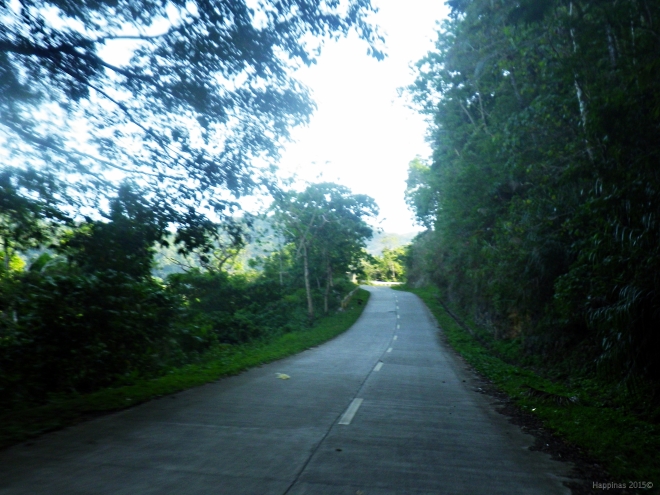 Long and winding roads of Sierra Bullones offers a pleasant drive to the hills.

It was a pleasant ride through the hills of Sierra Bullones. Located at the interior part of the province, the municipality of Sierra Bullones was a place of refuge for insurgents during the Philippine Revolution and the Filipino-American War. After the road construction, more people started settling in and started farming. The roads were surprisingly smooth and well paved. Apparently, it was as a national highway but people rarely pass there.

I have never seen this view of Bohol.

As we went through the road, we saw several rice terraces. I have never known this about Bohol so it was cool to know it. After an hour on the motorbike ( my butt hurt), we finally reached Chocolate Hills. It was funny while paying the entrance fee, one woman was saying that we really needed to buy water because it was 250 steps to reach the top of the viewing deck ( maybe a lot of people find it already tiring but since I love walking, it was easy).

My 2015 version of the cliche photo of Chocolate Hills

Since it was a top tourist stop, you would normally have to wait for your turn to take a photo of the hills. Somehow Chocolate Hills always gives me this alien vibe. The view is just out of this world. 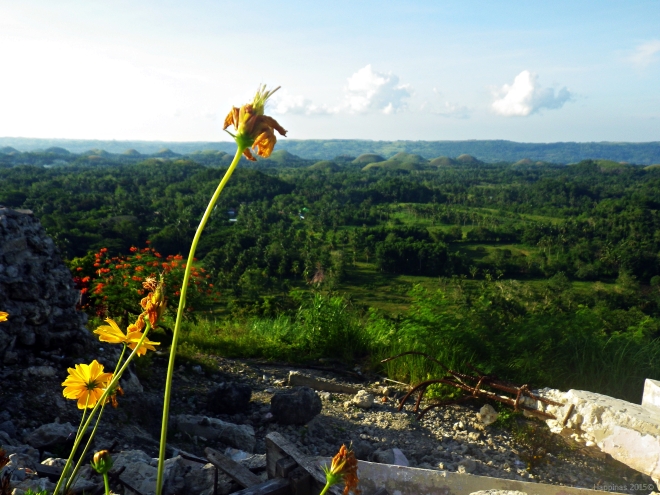 Another perspective from the viewing deck. The less photographed side.

Last 2013, the viewing deck was destroyed by a magnitude 7.2 earthquake including the old churches around Bohol. Until now, you can still see remnants of the disaster. You will see the site landmark on the ground. You can still help in the rebuilding here.

A scientific explanation to how Chocolate Hills were formed.

We grabbed some ice cream and water to cool down, we stayed for an hour on the viewing deck to rest our butts. The driver took us through the Sierra Bullones again as the sun sets. He was very happy to get paid that much (he was even showing us where he lived), he said that it was good that travellers like us decided to stay in the less popular places as it helps the local earn more.When we reached Jagna, we had a light dinner and headed back to the pension house to prepare for the morning trip to Camiguin. 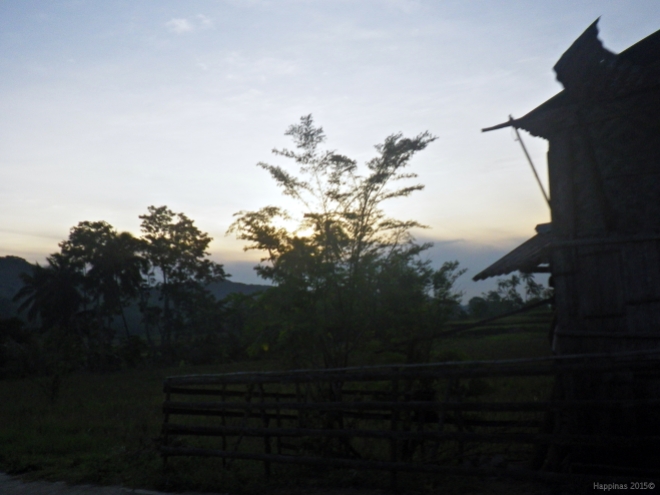 Sun was slowly fading as we head back to Jagna

It was a nice cap off as we saw the starts shining over us and the cool breeze slowly calling us to sleep. As part Boholana, I saw my father’s province ( with an area of 4,821 km²) in a different perspective far from the popular beaches and more into the historical and geological ones.

Indeed, you can never be too familiar with one place. There will always be a different facade waiting for you to discover.

Browse over the gallery more photos of the adventure.

previousWarrior Wednesdays: Always Do Your Best
nextWednesday Warriors: How to Start Project 333